Everest, the film, opens by telling the audience that 1 in every 4 climbers that attempt to summit Earth’s highest mountain, die. In other words, this film is not going to have a happy ending. If you’ve read Jon Krakauer’s book, Into Thin Air, or are familiar with the story it tells, then you’re aware that this film is based on real events. This is a harrowing tale. Director Baltasar Kormakur (2 Guns, Contraband) shows restraint by not trying to over dramatize the story and by doing so creates an eerie sense of doom and frustration instead of excitement. It feels right. You find it difficult to imagine why people would put themselves through this life and death ordeal but these are not super men or women. They are regular folks like you and me.

The film focuses on Rob Hall (well played by Jason Clarke) who’s company Adventure Consultants pioneered the commercialism of climbing Mt. Everest in 1991 and the group he lead on the tragic 1996 Everest climb. Clarke’s portrayal of Hall is of a decent, caring man who knows what he’s doing but as his business rival, Scott Fisher (Jake Gyllenhaall) says to him, he’s a ‘hand holder’ and that is a trait that leads to his demise.

Hall says goodbye to his pregnant wife, Jan, warmly played by Keira Knightly before meeting up with his group in March 1996 to begin training for a March 10 summit attempt. Josh Brolin is a standout as Beck Weathers, a Texas doctor with plenty of swagger who’s left his wife, Peach (Robin Wright), back home and angry about his taking this trip without consulting her. John Hawkes is solid as Doug Hansen, a mailman making his third attempt to reach the summit in the hopes of setting an example for his kids of what a simple man could accomplish through sheer will. The always reliable though little known Michael Kelly plays Jon Krakauer, who’s on the trip with the intention of writing a story for his magazine Outside. Naoko Mori is Yasuko Namba a middle aged business woman who had already summated the other 6 highest mountains in the world. Everest would complete the 7 Summit quest. 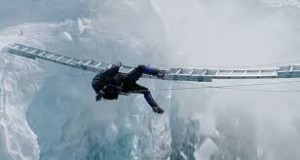 Climbing Everest had become so popular that the mountain was overcrowded that year which caused log jam issues getting up and back from the top. Hall convinces Scott Fisher to combine their teams and work together in hopes of sharing the workload and getting to the top and back before the oncoming storm reaches them. The last third of the film takes place on May 10 and their summit attempt. It doesn’t go as planned, of course, though most of them do reach the summit they don’t all make it back down. I won’t go into detail about this portion of the film but it is heart wrenching.

The film is wonderfully shot and well acted. It’s nerve racking and intense and thoroughly engaging to the end. I’m a big fan of these types of adventure films but it is not for the faint of heart. You will definitely need a big cup of hot chocolate with a hefty dose of brandy to recover.

Previous Black Mass Next The Martian